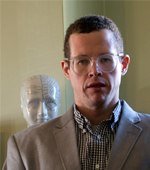 My research focuses on how children and adolescents learn about their environment, how brain circuitry involved with learning may be impacted by early life stress, and how these brain changes may confer risks for negative outcomes. Through the use of structural and functional MRI, my research aims to learn about the impact of stress on neurobiology through a focus on two different forms of behavior. First, I have explored how early life stress may increase risk for disruptive behavioral problems through alterations in the brain. Second, I have focused on how early life stress may convey risk for depression. Through a series of studies, I have found that the risks for different forms of psychopathology associated with early life stress are conveyed by specific alterations in brain circuitry responsible for reward and socio-emotional information processing. This research program includes longitudinal assessments of individuals at multiple levels of analysis, including neurobiology, family functioning, and developmental history.

Hanson J. L., Knodt A. K., Brigidi B. D., & Hariri A. R. (2015). Lower structural integrity of the uncinate fasciculus is associated with a history of child maltreatment and future psychological vulnerability to stress. Development and Psychopathology, 27(4pt2), 1611-1619.

Kudos to Jamie Hanson, the recipient of the 2019 American Psychological Foundation (APF) Robert L. Fantz Memorial Award. The Fantz Award "encourages and supports careers of promising young investigators in psychology or related disciplines and covers basic scientific research or scholarly writing in the fields of perceptual-cognitive development and the development of selective attention; and research and writing on the development of individuality, creativity and free choice of behavior."

Jamie Hanson, Assistant Professor, Department of Psychology, is part of an interdisciplinary team led by Caroline Oppenheimer, Psychiatry, to develop a neuroimaging task to measure teen brain response to social media. The project was awarded $25,ooo through the Pitt Innovation Challenge (and Pitt's Clinical and Translational Science Institute). The work is with Jennifer Silk, Sophie Choukas-Bradley, Helmet Karim, and Mary Phillips.

Jamie Hanson is quoted in the January 14 Pittsburgh Post-Gazette article "Growing Up Through the Cracks" on the effects of poverty on families.

Jamie Hanson is quoted in the November 1 Medical Xpress article "Strengthening Self-regulation in Childhood May Improve Resiliency Later in Life."

Jamie Hanson is the recipient of the Steven D. Manners Award, announced in the July 11 PittWire. His project is titled "Leveraging Ecological Momentary Assessments to Understand Associations Between Poverty, Stress Exposure and Environmental Volatility."

Jamie Hanson is featured in the Pittwire accolades alongside Tristen Inagaki for having been named 2017 APS Rising Stars.

The American Psychological Society has selected Jamie Hanson as a Rising Star. The Rising Star designation recognizes outstanding psychological scientists in the earliest stages of their research career post-PhD whose innovative work has already advanced the field and signals great potential for their continued contributions.

Jamie Hanson's research was discussed in Vice Magazine in the article "The Science of How Poverty Harms the Brain," which was posted to their website on July 14, 2017.

The research of Jamie Hanson, Assistant Professor, Psychology, and LRDC Research Scientist, was the subject of the March 1 Pittsburgh Post Gazette article “Pitt Study: Abuse in Childhood can Lead to Misbehavior Later.”